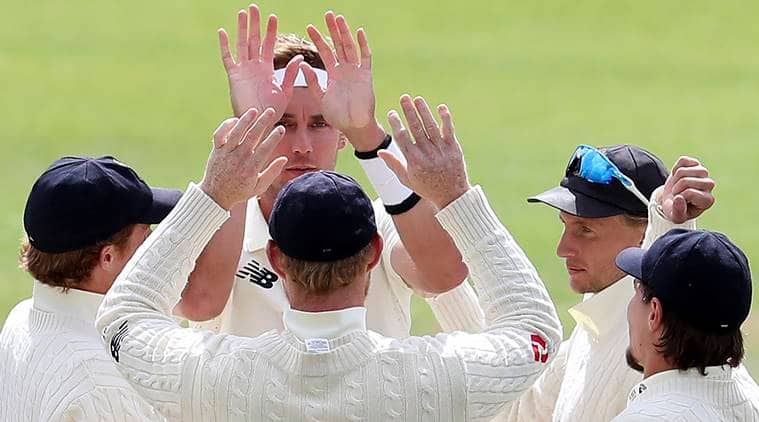 England’s Stuart Broad celebrates with teammates the dismissal of West Indies’ Kraigg Brathwaite during the fifth day of the third cricket Test at Old Trafford in Manchester. (AP Photo)

England beat West Indies by 269 runs on the fifth and final day to reclaim the Wisden Trophy by a margin of 2-1 in Manchester on Tuesday. This is the first time since 1888 that England have come back from being 1-0 down in a home three-match Test series and turned it around to win. Earlier, after rain washed out play on Monday, the third test resumed on time with the hosts refreshed and in a predatory mood to regain the series.

West Indies were already two wickets down for 10 runs and needed to bat with resilience through the day to force a series-saving draw. But after one brief interruption for a passing shower, Broad reached 500 wickets in style within the first hour when he trapped opener Kraigg Brathwaite plumb in front, struck low on the back leg on 19. The wicket was also Broad’s third of the innings and ninth of the match.

By a strange coincidence, Brathwaite was also the 500th wicket in 2017 for James Anderson, the only Englishman ahead of Broad on the wickets list. Anderson bowled better than Broad in the morning session without reward.

The rain gods seemed to be on the side of the West Indies as play was repeatedly interrupted by showers. But the last four wickets fell quickly as the visitors put a hapless display of batting.

With Ben Stokes retreating to a back-seat role, Stuart Broad filled in as England’s all-action allrounder to move the team within sight of a test series victory over the West Indies.

Broad smashed a counterattacking 62 in a return to form with the bat, then played a lead role as part of England’s destructive pace quartet to leave the West Indies on the ropes after day two.

In reply to England’s first innings of 369, the tourists avoided the follow-on but could only muster 197.

Chasing down the target was never an option and all the visitors had to do was survive 98 overs on the final day. But a lacklustre performance and a destructive spell by Chris Woakes and Stuart Broad sealed the fate in favour of England.

This series saw two good pace bowling teams perform to a very similar level. Ultimately England’s batsmen coped with the challenge better and that is probably why they won the series.