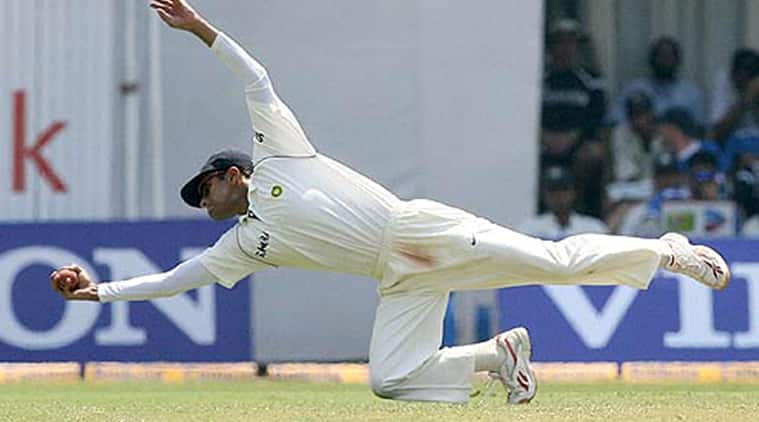 Rahul Dravid was renowned as an excellent slip-fielder. (Source: Reuters)

Aside from his technique, determination, and more than 25,000 runs in international cricket, Rahul Dravid was also renowned as a brilliant fielder on the pitch. Remembering that, Harbhajan Singh shared a montage video of some of Dravid’s best catches in his career on Tuesday.

Dravid played 509 matches for India and took a total of 406 catches while mostly standing in the slip cordon. In Test cricket, he holds the record for the most number of catches (210) taken by a non-wicketkeeper.

Dravid’s record still stands eight years into his retirement and is followed by Mahela Jayawardene (205), Jacques Kallis (200), Ricky Ponting (196), and Mark Waugh (181) in the list of most catches in Test cricket.

Of @harbhajan_singh‘s 417 Test wickets, 51 dismissals involved Dravid – the most by any of his team-mates. https://t.co/HRbfkApJvW

In an interview ESPNcricinfo in 2010, Dravid mentioned how practice is vital to the art of catching.

“You should enjoy it (being a slip fielder). You should want to be there. It is a position where you’ve got to concentrate the whole day, where you are always in the game,” Dravid had said.

“One of the important things I have found with slip catching is, you need to have relaxed hands. When an edge is coming towards you, the last thing you want to do is tighten up or freeze or snatch at the ball.”

One of India’s most under-rated fielders. Thoughout his career Dravid took many stunning catches. Here I’ve put 27 catches in a single clip for y’all.

I might delete the video later to avoid copyright so if you want you can download it. pic.twitter.com/YGUnFPFehK

Dravid also kept wickets for India for a period of time before the debut of MS Dhoni. He played as a wicketkeeper for 73 ODIs between 1999 to 2004, affecting 84 dismissals, including 71 catches and 13 stumpings.