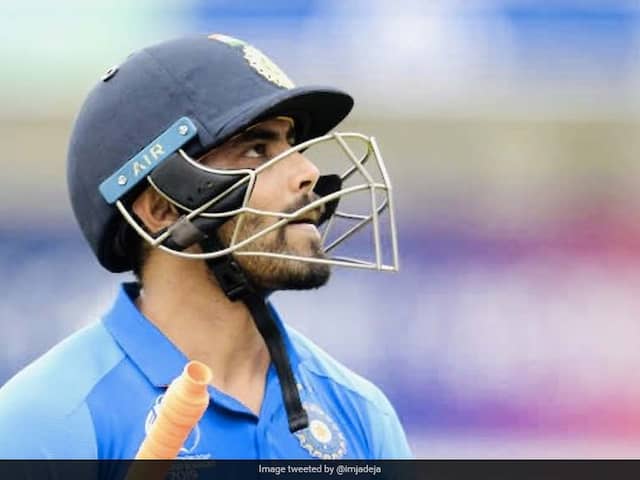 
Indian all-rounder Ravindra Jadeja, on Friday, took to Twitter to share an emotional message, remembering India’s loss to New Zealand last year in the semi-finals of the 2019 World Cup. In his tweet, Ravindra Jadeja shared a picture of himself and wrote, “We try our best but still fall short sometimes. One of the saddest days!”. Ravindra Jadeja batted brilliantly in the semi-final against New Zealand last year, scoring 77 from 59 balls. However, it wasn’t enough to get India over the line as they lost the game by 18 runs.

We try our best but still fall short sometimes

Ravindra Jadeja’s knock was studded with four boundaries and four sixes. The all-rounder’s late counter-attack helped India come back in the match after losing the top order early on in the chase.

Ravindra Jadeja and MS Dhoni managed to stitch a partnership of 111 runs but couldn’t get India past the finish line.

During the match, Ravindra Jadeja managed to do well with the ball as well. The left-arm spinner, in his 10 overs, took 1 wicket and gave just 34 runs away. He had a brilliant economy rate of 3.40.

For New Zealand, Kane Williamson and Ross Taylor were the stars with the bat as they helped their team reach 239.

Kane Williamson scored 67 off 95 balls and Ross Taylor was on 74 from 90 balls before being run out by a brilliant throw from Ravindra Jadeja.

Jadeja has played 165 One Day Internationals for India and scored 2,296 runs and taken 187 wickets so far.