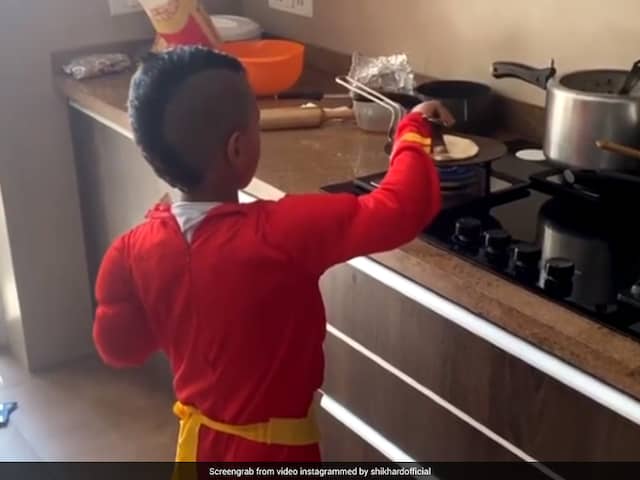 Shikhar Dhawan will be seen playing for Delhi Capitals if and when the IPL 2020 starts.© Instagram


Shikhar Dhawan is out of action like most of the cricketers worldwide due to the coronavirus pandemic. However, the Indian opener is keeping his fans entertained with frequent social media posts of himself and his family. On Sunday, Shikhar Dhawan took to Instagram to share a video of his son Zoraver dressed in a superhero costume and “Cooking Chapati” in the kitchen. “Even Super Heroes can Cook #Zoraver Cooking Chapati,” Shikhar Dhawan captioned the video, which was soon flooded with heartwarming messages from fans.

Earlier in the week, Zoraver was seen shaving Dhawan’s head with a trimmer in an Instagram story. “Fresh look thanks to headmaster Zoraver,” Dhawan wrote along with the video.

Dhawan had joked about his hairstyle a few weeks back when he shared a photo of himself on Instagram wearing a funny wig with colourful hair.

“Finally got some hair,” he captioned the picture on Instagram.

Dhawan will be seen playing for Delhi Capitals if and when the 13th edition of the Indian Premier League (IPL) commences.

The Indian opener adopted two dogs recently. Sharing the news on the micro-blogging site, Dhawan posted a couple of pictures posing with his two “new family members”, with his son Zoraver also sitting beside him in one of the pictures.

In his post, the left-handed opener also revealed the names of the two latest additions to his family.

For Dhawan, IPL was of much more significant than other players as he was coming off an injury break and he would have been looking to use the cash-rich league to prove his match-fitness and strengthen his case to make a comeback into the national team.